On Three Marks--Tooley, Hatfield and Malan 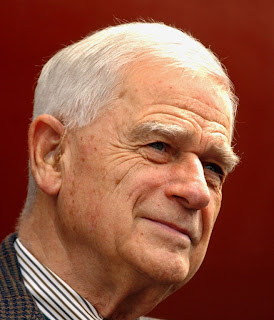 When I was in college in the 1980s one of the evangelical leaders who most shaped was a man by the name of Mark Malan. Mark, a leader in InterVarsity Christian Fellowship, was as committed an evangelical Christian as I have ever known. One of the stories I heard about Mark was that in his frustration over national politics in America in the 1970s and 1980s he had taken to casting his vote for president by writing in the name Mark Hatfield, a legendary Senator from Oregon and an evangelical of international significance. I mention Hatfield because, as I said here a while back, I will be attending a conference on September 14 at Georgetown University very much in the spirit of the great Hatfield. The gathering, entitled “Evangelicals for Peace: A Summit on Christian Moral Responsibility in the 21st Century”, interested me because it was being planned in part by the group “Evangelicals for Peace”. This new organization is one I came to learn about through Aaron Taylor. When he told me the reasons for the event and the people who were planning to come I knew I had to be there. Now, as the conference draws near, the planners and participants of the event are the subject of the kind of rhetorical hit-job that has become so sadly common on the Religious Right. Mark Tooley, President of the Institute on Religion and Democracy (IRD), has determined the real reasons for this event and published them under the headline “Evangelical Left Plots D.C. Pacifist Summit”. Here are the key claims Tooley makes against our gathering:

2. He says we believe “evangelicals join most Americans in being too enthusiastic about defending the country rather than offering the preferred mournful apologies.”

3. He thinks the conference is “slanted towards voices prone to portraying America as the chief threat to peace in the world.”

4. He intuits that the conference will “primarily be a gabfest uninterested in deep moral reflection and instead seeking the rhetorical satisfaction of denouncing violence and its ostensibly wicked advocates.”

5. He determined that “the chief direction seems to be the attempted emasculation of evangelical support for a just and decent world that desperately requires American strategic strength.”

I want to thank Mark for his extraordinary ability to read code words and translate them into their actual meaning. I had no idea that these were the motives behind the conference, especially because the main description of the event says the following:

On Friday, September 14th a group of evangelical scholars, journalists, activists, and pastors are convening for the first ever Evangelicals for Peace summit. The stated goals of the summit are:
• To build and birth a network of evangelical scholars and activists committed to the pursuit of a Biblical, comprehensive, and proactive peace
• To reduce violence, work toward human flourishing, and prevent war
• To mobilize and educate a new generation of evangelicals committed to the pursuit of peace
• To convene a gathering of non-profit and pastoral leaders who are actively working for peace with justice throughout the world
• To give a special focus on peace as it relates to U.S. foreign policy

As I was trying to understand the disconnect between Mark’s translation of those goals into the language of America’s culture wars and scorched earth political discourse I came across a fascinating post that gave excellent historical background on the IRD and Tooley’s style of “analysis”. David Swartz, Professor of History at Asbury University, notes that Tooley’s opinions reflect the institutional bias of the IRD and its tactics of simplistic demonizing those it disagrees with. He offers this excerpt from his forthcoming book:

In 1983 conservative activists repeatedly disrupted a conference on peacemaking at Fuller Theological Seminary. During a workshop on Central America, one protester shouted his objection to evangelical accommodation with Communist totalitarianism until delegates ushered him out of the room. Another protester berated the 1,700 delegates from a balcony during a plenary session. When the disturbance brought the proceedings to a halt, the audience sang the hymn “Amazing Grace” to drown him out. A display table manned by the Institute for Religion and Democracy urged delegates to sign a “research report” accusing Senator Mark Hatfield and Sojourners’ Jim Wallis of advocating Soviet-style communism. These scenes and what they represented—an increasingly vocal and activist right-wing coalition of Christians—appalled progressive evangelicals.

When I first read Mark Tooley’s post I admit it discouraged me, but as I read this broader narrative in which the IRD once spoke of Mark Hatfield as “advocating Soviet-style communism” I am encouraged. If the IRD spoke of Mark in that way, and they speak of this gathering in an equally distorted way, then Evangelicals for Peace is in good company. My simple goal is to gather with other followers of the One who blessed peacemakers and to pray for a more faithful witness to Him.
Posted by Greg Metzger at 4:31 PM